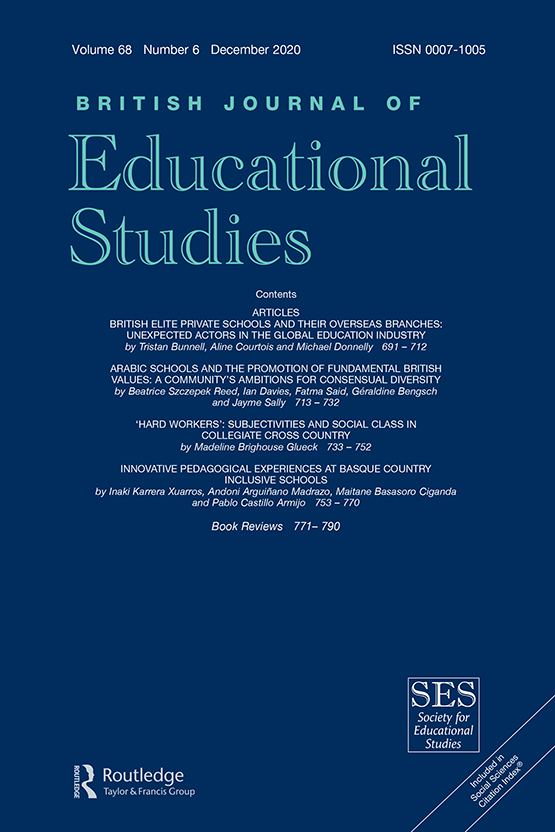 The Society for Educational Studies (SES), formerly the Standing Conference on Studies in Education (SCSE), is the UK’s longest standing national academic society in the field of education, now in its seventieth year.  Like most academic societies, it has evolved its own characteristic independent activities, in particular a regular journal and an annual conference.  These have adapted to a changing context under the aegis of the Society.

The SCSE was established at an inaugural conference held in London on 19 December 1951.  The conference was held, as was noted, ‘to discuss the problems raised by the growth of educational research over the last few decades’, all the more so because it was generally felt that ‘British studies in the various fields of education – philosophical, historical, social, psychological and pedagogic – need to be better organised and better known’.  It was envisaged that the SCSE would maintain close contact with the National Foundation for Educational Research (NFER), the Scottish Council for Research in Education (SCRE), and advisers and consultants from overseas.  Its original programme was ‘to try to give greater continuity in the efforts of those responsible for research in the University Departments of Education and elsewhere, to exchange views on research and devise means for co-ordinating it’.

The SCSE was founded rather later than comparable societies in other countries around the world.  The American Educational Research Association (AERA) dated from 1916, SCRE from 1928, The Australian Council for Educational Research (ACER) 1930, the New Zealand Council for Educational Research (NZCER) 1934.  The SCSE was enabled by the provisions of the 1944 Education Act, the beginnings of research facilities and leadership in university education departments, and the emergence of the welfare state after the Second World War; the British Sociological Association was also established in 1951.  Moreover, the SCSE was essentially an elite association which only professors of education and directors of Institutes of Education were eligible to join, giving it the reputation of a ‘professors’ club’.

Nonetheless, the SCSE did have achievements to its credit.  The first of these was to set up an academic journal, the British Journal of Educational Studies (BJES) in 1952.  The British Journal of Educational Psychology had already been established in 1930, and some university departments such as at Birmingham and Durham had already set up their own, but this was to be the first generic British-based academic journal in the field.  Its first editor, from 1952 until his death in 1973, was the historian of education A.C.F. (‘Rudolf’) Beales from King’s College London.  It was founded initially to support areas outside psychology, to give prominence to articles embodying research but not ‘narrowly specialist’, and ultimately intended ‘to serve the needs and interests of everyone concerned with education whom the implications of specialised research affect’.  Its founders emphasised that the new journal would never lose sight of its broad objects, defined as being ‘to explain the significance of new thought, to provide philosophical discussion at a high level, and to deepen existing interest in the purposes and problems of current educational policy’.

Another achievement was to promote independent and critical analysis of the problems facing a growing education system in the postwar years.  It did so through annual meetings of its members on a range of topics, faithfully recorded in the BJES.  These meetings reflected deepening study of the history, philosophy and sociology of education, regarded as the foundation disciplines of the field, and tensions between them no less than mutual support.

During the 1960s, the educational studies and research expanded but became still more diversified.  New specialised societies  were created, including for philosophy of education and history of education. The establishment of the British Educational Research Association (BERA) in 1974 as a more representative body on behalf of educational research led to new thinking as to how the SCSE should respond to a more crowded field.  This was also the case for  BJES, as BERA founded its own journal, the British Educational Research Journal (BERJ) from 1975 and the Oxford University Department of Educational Studies established another generic journal, the Oxford Review of Education (ORE), the following year.  The gradual expansion of the field of education also gave way to challenge as economic contraction affected the university system and the State came to take an interventionist role in higher education from the 1980s onwards.

By the turn of the century, the Society was ready for radical change, and it agreed at its Annual General Meeting in 2001 to change its name to the ‘Society for Educational Studies’; to betoken a more general role in supporting its field of study.  Meanwhile it was active in dispensing annual book prizes and regular awards for research, and began an annual seminar series, to stimulate innovation and reward excellence.  Its introduction of a two-day annual colloquium held at Oriel College, Oxford and the further expansion of the BJES to six issues per year from 2020 were examples of new growth and fresh support in changing times.

McCulloch, G. (2017) ‘Education:  an applied multidisciplinary field?  The English experience’, in Whitty and Furlong (eds), Knowledge and the Study of Education, pp. 211-30

18th Sep 2019
The Elementary Education Act of 1870: And the Nineteenth-Century Foundations of Modern Schooling in Britain